Getting Reliable Information on 5G

There has been a lot of inaccurate and misinformation circulated about 5G recently. Finding accurate and reliable information is more important than ever and to help in that regard we have put together a collection of recent statements by health authorities that provide authoritative information on 5G and health as well as factsheets by trade organizations that explain how the technology actually operates.

Have a look at the following resources:

“The Australian Radiation Protection and Nuclear Safety Agency (ARPANSA) safety standard sets limits for exposure to RF EME. These limits are set well below levels at which harm to people may occur. […] At exposure levels below the limits set within the ARPANSA safety standard, it is the assessment of ARPANSA and international organisations such as the World Health Organisation (WHO) and the International Commission on Non-Ionising Radiation (ICNIRP) that there is no established scientific evidence to support any adverse health effects from very low RF EME exposures to populations or individuals.”

"Contrary to some claims, there are no established health effects from the radio waves that the 5G network uses. This network currently runs on radio waves similar to those used in the current 4G network, and in the future will use radio waves with higher frequencies. It is important to note that higher frequencies does not mean higher or more intense exposure. Higher frequency radio waves are already used in security screening units at airports, police radar guns to check speed, remote sensors and in medicine and these uses have been thoroughly tested and found to have no negative impacts on human health."

GSM Association (GSMA) on “5G, the IoT and Wearable Devices: What do the new uses of wireless technologies mean for radio frequency exposure?”:
https://www.gsma.com/publicpolicy/resources/5g-internet-things-iot-wearable-devices
Posted by Mobile & Wireless Forum at 5:56 AM 4 comments:

As part of the MWF’s ongoing support for research, we recently completed a project to support an update to the dosimetric human body models used to assess SAR compliance in the extremities. Currently, Radio Frequency (RF) exposure standards as well as government regulations define different limits for the Specific Absorption Rate (SAR) induced in the body and in the extremities (or limbs). However, the numerical human body models standardised for RF exposure compliance evaluation in the IEC/IEEE 62704-2:2017 standard lack details of the body tissue definition that allow discriminating between the body and extremities, while many simulation tools allow for this evaluation provided corresponding tissue definitions are available.

Therefore, as part of the routine ‘maintenance’ update of  IEC/IEEE 62704-2:2017, we decided to develop and propose an updated model with the relevant body and extremity tissue definitions. The MWF engaged electromagnetic modelling experts Remcom to review the relevant standards and to produce updated models that can now be made available as part of the next revision of the standard.

The work resulted in detailed updates to the existing standard models, which included 14 tissue types present in the voxel meshes in the regions classified as extremity. The tissues in these extremities included: blood, blood vessel, body fluid, bone marrow, cancellous bone, cartilage, cortical bone, fat, ligament, muscle, nerve/spine, skin, toe and finger nails, and lymph and each was mapped and information provided on the relevant standard that they applied to.

Posted by Mobile & Wireless Forum at 9:21 PM No comments:

Early on, the region of Brussels in Belgium decided to introduce arbitrarily low EMF exposure limits from base stations, despite the overall consensus in the scientific community that the international guidelines for exposure limits proposed by ICNIRP are sufficiently safe.

In time however, the Brussels government was confronted with the consequences of this decision. In 2013, when the 4G network came to be deployed – the government faced fierce discussions in the parliament on whether or not to increase the very low limits to a point where 4G could be introduced. The political majority finally succeeded in doing so, but only increased the limits to the bare minimum needed to introduce 4G.

Now, the Brussels government finds itself in the same position again. Given the current use of the mobile network in Brussels, with the high demand for faster data connections and greater capacity there is no room left to introduce 5G. Hence, the discussions among politicians recommence on whether or not limits should be increased. Having departed from a scientific rational long ago, the argument for changing the limits becomes more and more difficult.

In the meantime, the countries who have adopted the science based ICNIRP limits, move ahead in introducing the newest generation of mobile technology and when confronted with questions can rely on advice of the World Health Organization which states:

“Considering the very low exposure levels and research results collected to date, there is no convincing scientific evidence that the weak RF signals from base stations and wireless networks cause adverse health effects.” (https://www.who.int/peh-emf/publications/facts/fs304/en/)

More information:
Posted by Mobile & Wireless Forum at 9:45 AM 2 comments:

Measurement of EMF exposure around small cell base station sites

With the ever-increasing demand for data on mobile devices, network operators are looking at a range of options to increase their network capacity. One of these options is through the use of ‘small cell’ sites, an umbrella term for operator-controlled, low-powered radio access nodes.

While the radio-frequency exposure from small cells is equivalent to other low-powered equipment, there has been interest in a practical study of the devices in real world settings. For this reason, the MWF and the Small Cell Forum commissioned in 2017 a measurement program, the results of which were published in a peer-reviewed scientific journal.

The graph summarises the study set up and conclusions. 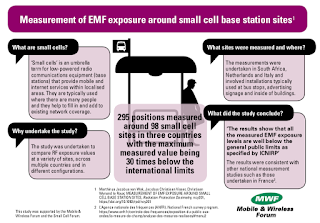 The Importance of Quality Control Measures in Scientific Studies

In a paper by Vijayalaxmia and Prihodab TJ, the authors looked at the influence of four quality control measures ideally associated with studies of exposure to radio-frequency (RF) energy. In this particular analysis, they assessed 225 published papers from the period 1990-2017, involving 110 animal studies and 115 studies of human cells exposed in vitro and in vivo to RF energy (involving 2,160 actual test results) for the inclusion of four specific quality control measures. The bottom line is that the inclusion of any, some or all quality measures saw fewer reported effects – or no effects at all - associated with exposure to RF energy, highlighting the importance of these measures in quality studies and publications in this area. Our Viewpoint provides a summary of the study and details the quality control measures and their importance in  studies in this area.

Mobile & Wireless Forum
The Mobile & Wireless Forum (MWF) is an international association of companies with an interest in mobile and wireless communications including the evolution to 5G and the Internet of Things. The MWF focuses on a range of issues concerning mobile and wireless devices including RF health and safety, certification testing standards and requirements, counterfeit issues and accessibility.